It is at this point well known that our rights are being stripped away from us in the name of security and counter-terrorism. However I argue that the solution posed by the modern states to this perceived threat is actually the only real threat to human liberty and thereby safety. Indeed the world does not feel as safe as it once did, but I assure you this is merely a feeling. In 2013, “Chairman of the Joint Chiefs Gen. Martin Dempsey informed the Senate Armed Service Committee (SASC), ‘I will personally attest to the fact that [the world is] more dangerous than it has ever been.'[1]  In fact most statistics suggest the very opposite, that we are living in the safest time in all of human history (and prehistory).[2] These government policies I am attacking utilize the use of fear, or terror if you will for the express purpose of creating an illusion of security which is in fact the hallmark of totalitarianism. These policies do the exact opposite of making us safer. They provide the illusion of safety when in reality they make us susceptible to totalitarianism.

In order to actually argue  this it is imperative that I cite empirical data towards this. The data which supports the claim that we are living in the safest time in human history is enormous and irrefutable (see second source). In fact most people do not realize the scope of violence which plagued human history and prehistory. In the time before state society violence was the norm. Allow me to show you several graphs which prove my point further.

You can see my point, the emergence of government society (or state society, in the non-marxian term) has caused humankind to fall into an era of untold peace. We are truly living in the safest times in all of human history. We are also, however, living in the most interconnected society in all of human history. If something significant happens in China (literally the other side of the earth) I hear about it instantly. Consequently I also hear about a terrorist attack somewhere in America or Europe instantly. It fills the news for weeks on end, it is only natural to see how this breeds fear and causes people like Martin Dempsey to claim that we have never been more unsafe. This is of course, a grotesque lie which serves no other purpose than to allow the government to strip away our rights in the name of counter-terrorism.

What ‘government programs’ am I referring to particularly? There are many. But for this we will emphasize on the most infamous programs of all, as revealed by Edward Snowden, programs which came about mostly in secrecy thanks to the Patriot Act [5]. Snowden revealed (illegally, of course) that the NSA had been illegally spying on hundreds of millions of innocent US citizens using massive data harvesting techniques. Let’s take a look at one of these NSA spying programs, PRISM (which the NSA is still using). PRISM is a NSA spying program which collects internet communications and data from at least nine major internet companies [4]. Snowden leaked this program because the government was”Without asking for public permission, the NSA is running network operations that affect millions of innocent people.” I’ve taken the liberty to show a few of the screenshots leaked by Snowden below. 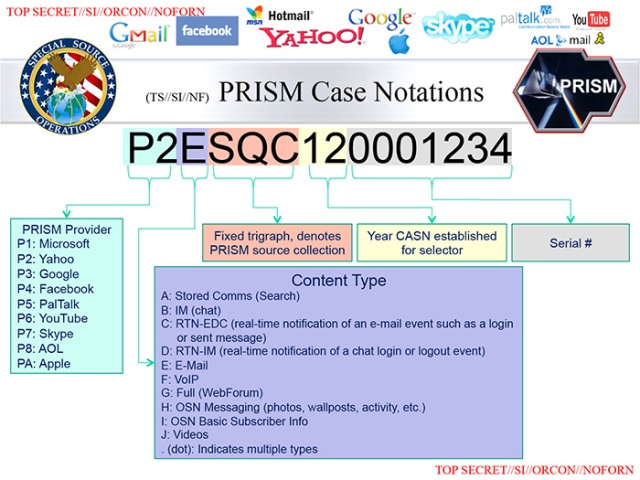 Of course the companies listed (in 2013) had and continue to have a practical monopoly over internet communications. Noting that this is just one of the NSA mass spying programs revealed by Snowden it must be said that there is no practical use for these mass spying programs. Why? Because they haven’t stopped a single terrorist attack since their creation! [6] These programs solely exist because popular opinion is that we are living in the ‘most dangerous times in human history’ and that they are actually stopping the (actually rare) terrorist attack, both of which are false.

So what danger is posed by these programs? By this attitude which favors security over privacy? The danger of the total erosion of all civil liberty. Am I being dramatic? Not in the least, we often say that “oh our government would never do that” when confronted with the horrific atrocities committed by the many 20th century states without realizing that people in Nazi Germany said the exact same thing. It is absolutely imperative to enforce the view that the freedom to privacy has infinitely more value than the illusion of security and safety (something we already have more of now than in all human history). As Edward Snowden said, “Saying you don’t care about the freedom of privacy because you have nothing to hide is like saying you don’t care about freedom of speech because you have nothing to say”. The mere fact that states today have this kind of information on their people is more than cause for alarm. What happens tomorrow when the state becomes tyrannical or is overthrown? What could the US do if it was a stalinist or fascist state (which is entirely possible) in 20 years time? The information the state has on everyone, and I mean everyone is more than enough to go after an entire group people solely based on their religious, political, or societal beliefs. What our government has now is the tool for the engineering of the perfect totalitarian state. It is the tyrants dream to have this much information on their people. What would Hitler do if he had this kind of access to information about his people? The German government before the Nazi’s took power easily could have had such a database if the technology allowed for it. If this was the case the whole world would likely to this day salute the third reich, think about that for a minute. So you tell me, which is more dangerous? The near impossible death from a terrorist attack or a government which illegally spies and knows everything about each one of its people?