I decided to write a special edition today dedicated to this great man, I spent a considerable amount of time writing this piece so I hope you enjoy reading it! 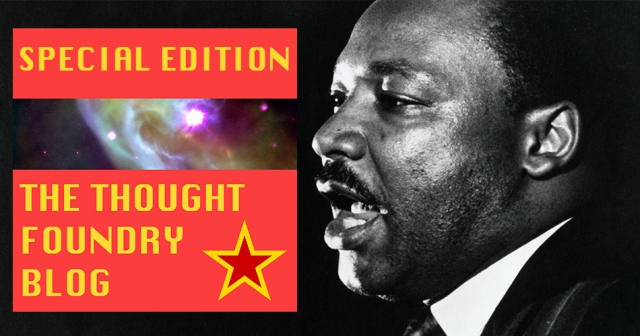 Martin Luther King has been hailed as a hero today by everyone ranging from Donald Trump to the most devout socialists. But in his time he was hated just as badly as the Black Lives Matter movement is today. This is a crucial historical parallel, these kinds of movements go against the status quo in promoting equality and social justice and as such are despised by a large number of people in their time only to be resurrected as heroes later. First we shall look at what MLK had to say about the two parties, both of which claim to ironically support his message today (ignoring it’s radical sentiment entirely),

“Actually, the Negro has been betrayed by both the Republican and the Democratic party. The Democrats have betrayed him by capitulating to the whims and caprices of the Southern Dixiecrats. The Republicans have betrayed him by capitulating to the blatant hypocrisy of reactionary right wing northern Republicans. And this coalition of southern Dixiecrats and right wing reactionary northern Republicans defeats every bill and every move towards liberal legislation in the area of civil rights.” – Martin Luther King Jr.[1]

Martin Luther King recognized that neither party has the interests of black people in mind. While today the democratic party parades slogans of progress and tolerance it is ideologically bound by its neoliberal convictions to support an economic system which is racist to its core. Democratic leaders have led the massive gentrification of urban housing at the expense of countless poor, mostly black urban tenets- not just in one city or two but across the whole country. Tens if not hundreds of thousands of poor black people were and continue to be kicked out of their homes in these (often democrat sponsored) city development projects. Beyond this one example, the capitalist system is solely responsible for systematically creating and maintaining poverty in the world today and it does not shy away from doing this at the disproportional expense of black lives, regardless of how racially and sexually ‘balanced’ a corporate board of directors meeting is.

King was often accused of being a communist which- at the time was considered to be a grave sin in America. It was a time when the Committee of Unamerican Activities ran rampant in suppressing and arresting suspected communists, as such King repeatedly denied being a communist. However Dr. King, like Malcom X came to an unequivocal anti-capitalist conclusion later in his life saying,

“[W]e are saying that something is wrong … with capitalism…. There must be better distribution of wealth and maybe America must move toward a democratic socialism.” – Speech to his staff, 1966.

“Capitalism has outlived its usefulness. It takes necessities from the masses and gives luxuries to the classes” – King’s 1952 letter to Coretta Scott

Of course King repudiated communism during his life however he was a staunch advocate of democratic socialism which is by definition and contrary to the common use of the term today, a form of socialism and not the capitalist social democracy of Bernie Sanders and co. Martin Luther King was revered by few during his time, yet today he is remembered as a martyr and a hero by all. In fact every year on this day we set aside a day of respect for him as a national holiday automatically. But during his time this was not the case. In fact the Southern Poverty Law Center released today a set of images (sources contained) which show that not only was King not revered in his time but adamantly despised by the majority. I have taken the liberty to upload these images below. 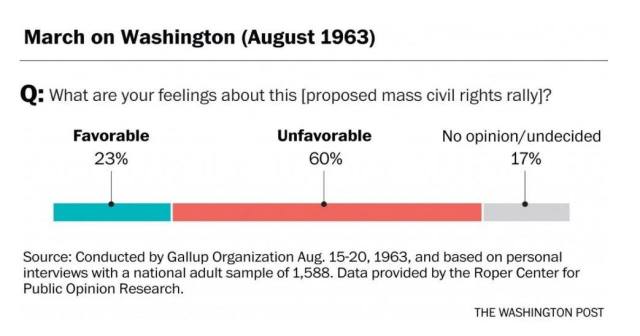 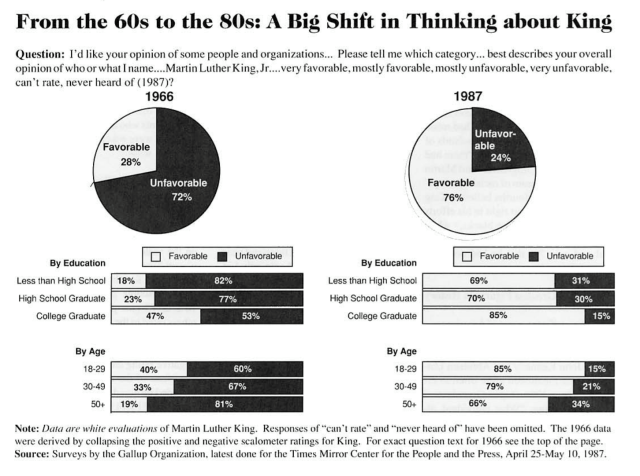 Naturally one can come to the conclusion that often these heroic leaders and the movements they started were in most regards despised by the majority of people in their time and then canonized later by those same people as ‘great men’ and ‘friends of freedom’ as a means of consolidating their supporters and deradicalizing their message entirely. But I point this out solely because there is a historical parallel today, and that is the Black Lives Matter movement today. Black Lives Matter, as most of you know, is a movement for the rights of African Americans in America today which contrary to popular belief are still a monumental problem, but I will return to this shortly.

MLK was seen not only negatively by the majority of people in his time but he was repeatedly targeted by the FBI and other agents of the US government. They even went so far as to threaten to blackmail him by releasing incriminating information on him to the public if he did not commit suicide. The full letter can be found below and additional information on the FBI’s ‘suicide letter’ here. 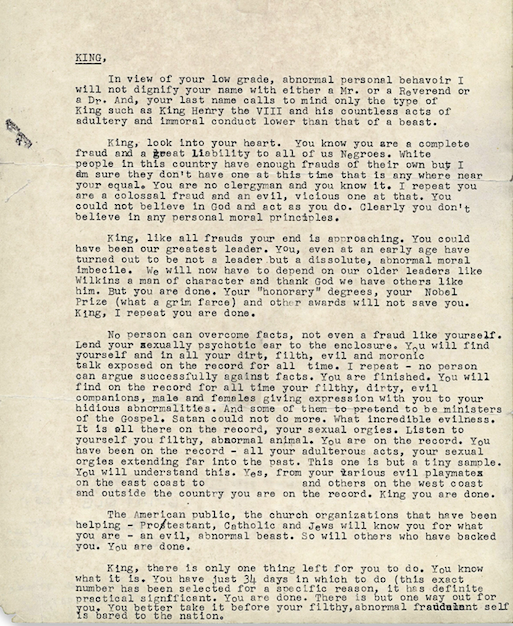 The historical parallel to the Black Lives Matter movement today is uncanny. There are many today who think that, just like in 1964, the BLM movement is violent and hurts its own cause. We’ve all heard this on the news. There is a reason that just 19% of black voters think that the justice system is fair to blacks and hispanics. In fact one only has to make a comparison to a crime which black and white populations commit equally and then compare incarceration rates. Marijuana use rates among white and black populations are roughly equal, however in being black you are 4 times as likely to be arrested and incarcerated for the same crime as your white counterparts.[2] Naturally I am keen on providing even more infuriating charts below, as always sources contained within the image: 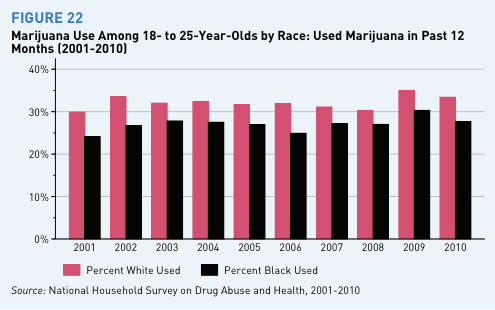 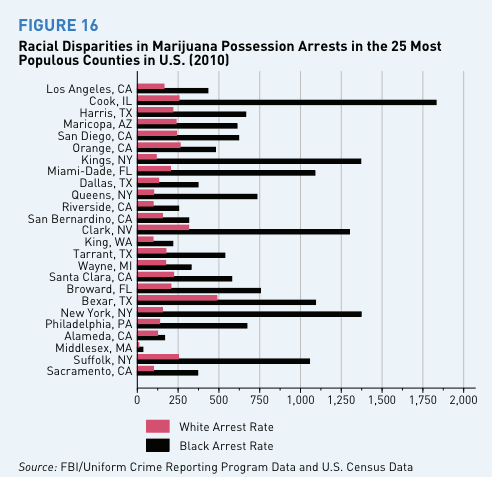 If this is not a clear example of how African Americans are still being systematically oppressed simply because of their race I do not know what is. This fact alone should cause even the most devout conservative to turn his head. Indeed we do not deny that black people are disproportionately affected by poverty, and that poverty breeds anti-social behavior. But this alone is not a sufficient excuse for the above chart, for when particular ‘crime’ rates are the same for black and white populations there can be no morally acceptable excuse. This isn’t because black people are ‘doing it more’, this is solely the use of systematic racism- regardless of its intentions.

The Black Lives Matter movement is a movement of racial equality and not racial supremacy, contrary to what Fox news would have you believe. This is a fundamental principle of the organization that cannot be ignored. But when people are so convinced that black people do not systematically suffer more hardships then their white counterparts the message is lost in its entirety. Black Lives Matter is not saying that All Lives don’t matter or that Black Lives Matter more than other lives, they are saying that black lives are still facing systematic oppression and disenfranchisement that cannot be ignored, and because of this fact it becomes necessary to focus on this one group of minorities.

It is also often for (usually white) people today to say that protestors today should “be more like Martin Luther King” by not blocking roads or being violent. Only this is a vast misinterpretation of what King was doing. For he was blocking roads for his marches, he was trespassing, he was breaking the law. And there is nothing wrong with that at all. Often their requests to protesters mirror something like, “you should go protest in the corner where no one can see or hear you”.

It is also often said that MLK would condemn riots as being too violent. While MLK was opposed to violent protest, he did not speak out against this in this way. MLK understood the nature of the riot, unlike the conservative commentators who saw them as rowdy, poor, uneducated black people taking to the streets to loot he said,

“…I think America must see that riots do not develop out of thin air. Certain conditions continue to exist in our society which must be condemned as vigorously as we condemn riots. But in the final analysis, a riot is the language of the unheard. And what is it that America has failed to hear? It has failed to hear that the plight of the Negro poor has worsened over the last few years. It has failed to hear that the promises of freedom and justice have not been met. And it has failed to hear that large segments of white society are more concerned about tranquility and the status quo than about justice, equality, and humanity. And so in a real sense our nation’s summers of riots are caused by our nation’s winters of delay. And as long as America postpones justice, we stand in the position of having these recurrences of violence and riots over and over again. Social justice and progress are the absolute guarantors of riot prevention.”[3]

Martin Luther King today would have said that Black Lives Matter, he would have continued to condemn the capitalist system down to its racist core. He would have openly shown that riots are the voice of the unheard and his radical message would not be blunted by a neoliberal democratic or republican party which uses his name only to further its own reactionary message while continuing to blindly support the system responsible for systematic racism today.