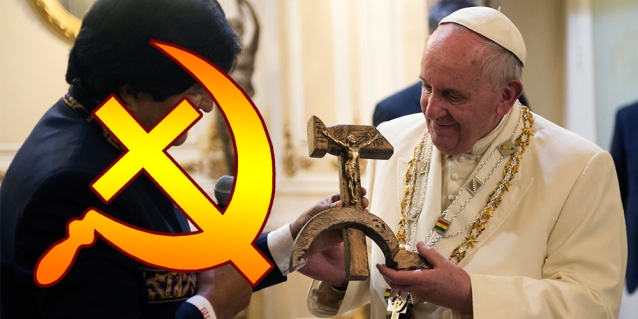 Pope Francis himself said:
“I can only say that the communists have stolen our flag. The flag of the poor is Christian. Poverty is at the centre of the Gospel… Communists say that all this is communism. Sure, 20 centuries later. So when they speak, one can say to them: ‘but then you are Christian'”
“The option for the poor (liberation theology) comes from the first centuries of Christianity. It’s the Gospel itself. If you were to read one of the sermons of the first fathers of the Church, from the second or third centuries, about how you should treat the poor, you’d say it was Maoist or Trotskyist.”
“It it has been said many times and my response has always been that, if anything, it is the communists who think like Christians. Christ spoke of a society where the poor, the weak and the marginalized have the right to decide. Not demagogues, not Barabbas, but the people, the poor, whether they have faith in a transcendent God or not. It is they who must help to achieve equality and freedom”
I am extremely critical of the Catholic church as an organization. I do not approve of the Catholic church or some of the popes more reactionary views. I do however, feel that he is right about this. I have the unique experience of being both a Christian and a communist. They do not contradict one another, on the contrary, my Christianity and my communism nurture and define each other. It is because I am a Christian that I have become a communist. It is the only view, in my mind, that is in sync with the message espoused by Christ.
The flag of true Christianity is not an American flag with a thin blue line and an arrow through an LGBT+ symbol. No, the flag of true Christianity is a red flag with a cross and a sickle.