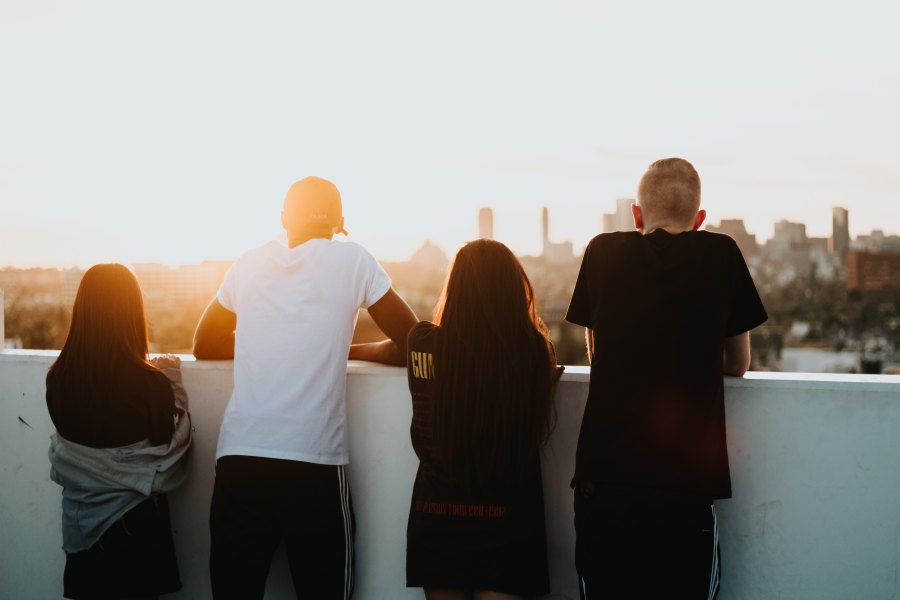 How I was shy in the days of High School! I was the kid who was known to say nothing at all. I sat with people at lunch who did not really know me and who I did not really know. Only in the last year or so, or perhaps the second to last year did I find fleeting friendship, and a few kindled flames who I still today know. But the regrets! So many missed opportunities, how I hated the unfreedom of that place in life. I wanted to move ever forward, to independence as one naturally does. But in my eagerness to transcend that place I forgot to live.

“High school will be the best days of your life”, my days are far better now, but it pains me to know what could have been. For me High School was hell, yet still I find that I would sell my soul to go back and to do it all over again as I was, but am, knowing then what I know now. Why, I do not know. I long for those days unfulfilled and untreasured, how many people did I long to know whose fire I never saw kindled. How many missed opportunities, how misunderstood I was to others and to myself! It is childish to wish to not be so constrained to this present form, bound by time and space and to the physical seat of consciousness, itself bound to laws that dictate it can only go forward, never backwards. Life, said Kierkegaard, can only be lived forwards, but it can only be understood backwards.

I read about some crazy 20-something lady who pretended to be in high school again. I think its the pain of regret that leads to people doing such things, clearly a regret far surpassing my own. Like the suicide bomber, we can understand the pain they feel, often in losing large sections of their family to American drone strikes, while despising the irrational ways by which they respond to their pain. Like the suicide the bomber, the “crazy lady” tries to ease her pain by doing something so false, deceptive, and childish instead of confronting her feelings and acting on them in a rational way. My aim here is to lay out my regrets so that you may learn from them and, if you are lucky, have none at all. Perhaps, in this, there may be some social utility in my own regretful years, and those years will not be so wasted. For me what I long for is the days of the past, with the people of the past who today, like me, are grown. It is those missed opportunities that I impossibly long to rekindle. But the feeling of general pain and regret, that is something I share with so many sad souls. It is not so much regret of this or that thing but a large, innumerable accumulation of missed opportunities. That is not something you want any part of.

My story in reminiscing of those days is one of caution to those of you who are today as I once was. You, young people, who are misunderstood, shy, and who are so paralyzed by the infinite possibilities of life that you choose to stay where you are without acting, to not hang out with that person, to not ask that person out, to not go to this or that social gathering. For most of my High School years I was horribly depressed, but there is a light in this. Today I no longer worry about the things I worried about then, the problems of High School today, in spite of painful regrets, seem so trivial to me. Had you told me this then I would not have believed you. There is naturally a truth in looking forward to the future. The freedom that comes with adulthood is real and truly liberating, but you must never forget to live now in favor of a more favorable future. I cannot stress this point enough.

There is another jewel of wisdom I must share with you, and that is this: Do not let that inner fire that burns within you die. I mean not only the fire of life but the fire of a youthful, mindful, rebellious spirit. To grow accustomed to the status quo is not a sign of maturity but of profound immaturity. It is not a transcendence into adulthood but a regression into childhood. Authority figures so necessary in the days of youth are replaced by the authority of the prevailing forms of society– and by the status quo itself. It is claimed that the restrictions placed upon you by society are for your own protection. Naturally, the youth are far more reckless and willing to put themselves in danger than fully mature adults, so there is of course a substantial grain of truth in this claim.

But the youth, having undergone substantial indoctrination into the prevailing culture, ideology, and superstructure of society, are only just finding their own independence of thought and introspection. Often with this is a profound realization that something intangible in the world is fundamentally wrong, immoral, absurd, authoritarian, and unnecessary. While this criticism is still embryonic, lacking the necessary ruthless criticism of all that exists and and the ruthless self-criticism of its own methods and conclusions, lacking the necessary analysis and objective understanding of scientific criticism, it is a necessary first step towards serious critical theory and social consciousness. Rebellion must be just rather than unjust, but in the final analysis, regardless of forms, we have to say that it is right to rebel. Do not let authority tell you that this is but a sign of immaturity merely because it is so often a symptom of youth. Instead of listening to authority and getting rid of such thoughts as you grow older you ought to embrace them and expand on them, not only in the days of youth but all the way into the time of old age.

The UN panel on climate change says we have 12 years to implement radical change to our global socioeconomic system to avoid a serious and permanent ecological catastrophe. It need not be said that your generation, and the generation of your children and grandchildren are placed in serious danger due to the recklessness of the former generations and an economic system based on a system of endless growth and expansion. Your generation will be the deciding factor in the struggle. It is a struggle not only for your very survival but necessarily a struggle to build a freer, more democratic, just and humane world.

For me this means socialism, a word so often spoken by those who do not understand what it really means. As a socialist I define socialism as nothing more than industrial democracy (the broad definition is social ownership and democratic control of the means of production), where political democracy stems not from a domination of the owners of the world, through undemocratic corporations and vast wealth syndicates, but from the people themselves having real control over their own lives, from the workplace to the ballot box, a politics separated from money, and individual wealth that never stems from the hard work of another. In such a world the existence of homelessness in the richest country in the world will rightfully be condemned as a crime against humanity. Listen, it was as absurd to speak of a right to healthcare in 1774 as it was to speak of freedom of the press in preliterate society. Part of the responsibility of your generation is to fight for positive liberties while preserving the negative liberties we have today, for a right to healthcare, higher education, housing, and a dignified life for all. You, the children of the internet, the future is in your hands and you must begin to forge it yesterday. You have to make the adults act on your behalf, the future of the human race is at once your future, and the current rulers of the earth in their old age, will not live to see your peril.

But this fight is inseparable from learning the ideas of those who came before you, from other people with real criticisms of the way things are it is inseparable from a greater struggle to create a better world. Google Murray Bookchin, Karl Marx, Rosa Luxemburg, Leon Trotsky, or better yet, switch to DuckDuckGo. You have to learn the things they don’t teach you in school. The ruling ideas of each age have only ever been the prevailing ideas of that ages’ ruling class. You will not learn in school the knowledge needed to adequately question and criticize social injustice that stems from the prevailing base and superstructure of our socioeconomic and political system, but rather you will only find such knowledge only on the bookshelf. In spite of all you learn and know, you have to be open to the possibility that everything you know is wrong. That is what separates a scientist from a dogmatist. The modern education system does not so much kindle a love of learning as it does a hatred of it. Do not be surprised when you actually read the books you were supposed to read in High School after you graduate, freely and of your own volition. To learn truly important things on your own without trivial rewards or recognition, that is something more valuable than gold.

In short, youthful rebellion can and should be transcended into a mature critique of the status quo, but far too often it is squandered in a social regression of the individual into childhood, replacing the authority over youth with the authority of an unjust society itself.

Mine is a cautionary tale, yet one of great hope and potential peril at the same time. Be smart and learn from my mistakes. Be not so eager for the next stage of life that you forget to live in this one. The next stage of life will still be there waiting for you. Be mindful and don’t give into social anxiety or be paralyzed by the infinite possibilities of life that you forget to go anywhere at all. I feel it necessary to quote a favorite poem by a Dylan Thomas. If my words have not moved you, perhaps those of Mr. Thomas will, That is what I have to say to you.

Do not go gentle into that good night,
Old age should burn and rave at close of day;
Rage, rage against the dying of the light.

Though wise men at their end know dark is right,
Because their words had forked no lightning they
Do not go gentle into that good night.

Good men, the last wave by, crying how bright
Their frail deeds might have danced in a green bay,
Rage, rage against the dying of the light.

Wild men who caught and sang the sun in flight,
And learn, too late, they grieved it on its way,
Do not go gentle into that good night.

Grave men, near death, who see with blinding sight
Blind eyes could blaze like meteors and be gay,
Rage, rage against the dying of the light.

And you, my father, there on the sad height,
Curse, bless, me now with your fierce tears, I pray.
Do not go gentle into that good night.
Rage, rage against the dying of the light.